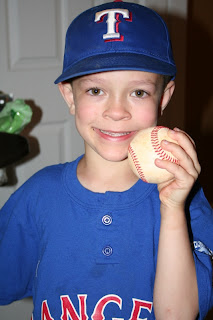 I couldn't be more proud of this boy.  Not because he earned the ball, and definitely not because of his baseball skills (or lack thereof).  I'm proud of him because he's becoming comfortable in his own skin, and that has been such a beautiful transformation to watch.

He's already announced that he's "retiring" from baseball after this season.  He doesn't mind playing, but he doesn't mind not playing, either, and while we want him to find that extracurricular activity he connects with, it's okay with us if he doesn't continue with baseball.  The boy doesn't seem to have an athletically competitive bone in his body.  He loves "getting a hit" but doesn't get upset when he strikes out.  He enjoys playing infield but doesn't complain when he spends most of his time in the outfield.  And just last week he realized the joy of "getting his baseball pants dirty" by sliding around in the grass.  He's awesome.

And he's smart.  And funny and quirky and (mostly) kind.  And he's himself regardless of his situation or circumstance and my heart is so full of love for that boy that it hurts.

He was so proud of that game ball, especially because he'd already (and matter-of-factly) let us know that he was pretty sure there weren't going to be enough game balls to go around.  He's now the owner of one, though, that he's chosen to display in the arm of his R2D2 robot.  It's actually a pretty perfect illustration of my pretty perfect boy.

Posted by Heather Haynes at 6:41 PM