My sweet Harry played his little heart out at soccer on Wednesday night.  We were short a couple of players, so he pretty much played the whole game...and very literally gave it everything he had. 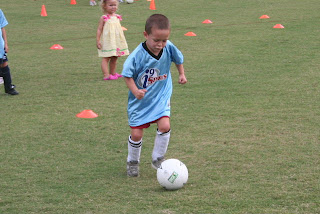 Babe did a decent job, too.  She warmed up well and even played a little bit, but she was not a big fan of the orange soccer ball used to actually play the game.  She prefers the white.

The Meddlers didn't pull out the win, but Harris brought home a much-deserved medal. 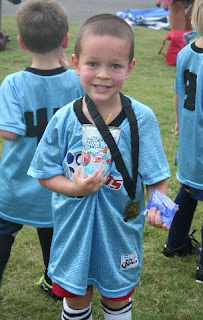 There's a lot to be said for earning recognition for hard work.  I couldn't be prouder of my little guy!
Posted by Heather Haynes at 11:22 AM