We geared up for the SEC Championship Game by heading over to Lilburn on Saturday afternoon for the annual Christmas parade.

While I LOVED the fact that it was warm enough to not have to bundle up, I've got to be honest and admit that I was cursing the heat by the time we left.  There's something just inherently wrong about sweating during a Christmas parade.  Maybe that's just me...

Anyway, it pays to be married to the Captain.  We had a prime parking spot and a prime parade viewing spot just waiting for our arrival.

And I promise it really was warm.  Harris just insisted on wearing his coat...for about thirty minutes. :) 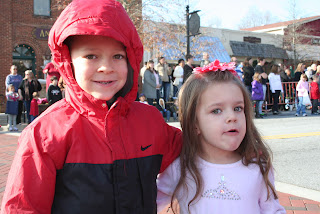 Granti, Cody, Raven, and Sam were able to join in on the fun, too!! 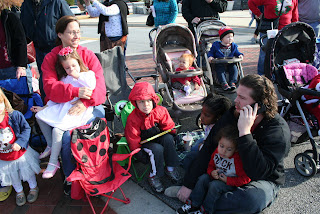 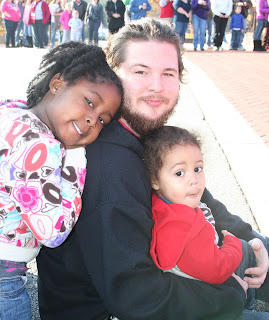 Emmy spent the majority of the parade eating cheerios in her stroller while the big kids had a blast watching the bands and dogs and trucks and girl scout troops walk by.  The candy being thrown was also a big hit! 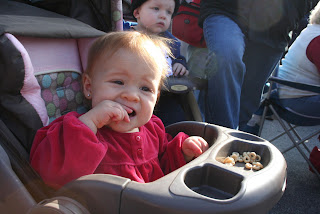 The highlight of the morning, however, occurred after the parade when an elf actually parachuted (seriously...from an airplane flying HIGH in the sky) into the city park.  I honestly wasn't sure what to expect, but it ended up being a pretty neat (if not weird) thing.  Babe LOVED getting to meet the elf.  I was honestly a bit surprised by him...he was soooo not what I expected to see jumping out of a plane!  He was nice, though, and the kids had a great time interacting with him. 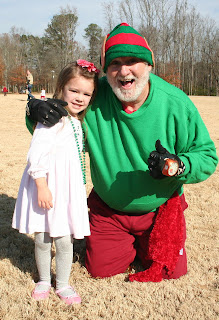 You gotta love Lilburn.
Posted by Heather Haynes at 5:31 PM