Because Biggie Big Nut LOVES checking things out from an upright position and because I was spending some time goofing around with Harry and Babe in the playroom yesterday, we decided to give the pink Bumbo seat a try. 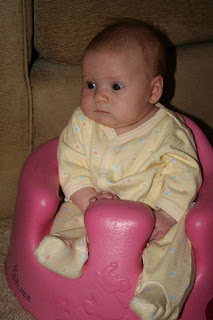 Hadley was beside herself with excitement because she thought we were using a "Dumbo" seat.  She was a little disappointed when I corrected her, but that was before she found the picture of the elephant plastered across the front. :) 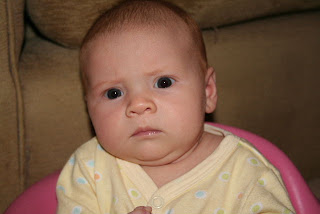 Emmy contentedly looked around (and tolerated her brother and sister all up in her face) for about fifteen minutes or so, until her little neck muscles got tired of supporting those big ol' cheeks. 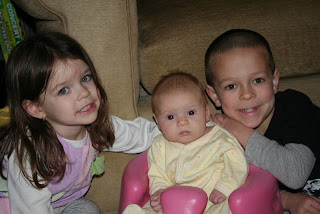 I have two more weeks of maternity leave. :(﻿
Posted by Heather Haynes at 11:02 AM