Boarding the boat was awesome.  After our family photograph was taken, we turned a corner and walked into the absolutely gorgeous three-story atrium of the Dream.  Crew members line either side of the entrance and applaud as your family is welcomed onto the boat via an announcement over the sound system ("Welcome aboard, Haynes family!).  Mom, of course, was crying. :) 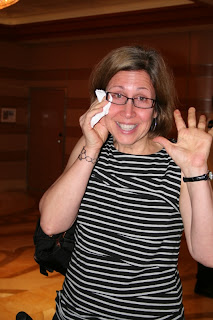 The Dream is a much bigger boat than the others I have sailed (the Magic and Wonder) but I, at least, had some sort of an idea as to what to expect.  Everyone else was blown away!  It was so much fun to walk around and marvel at all of the intricate details as well as the sheer size of everything! 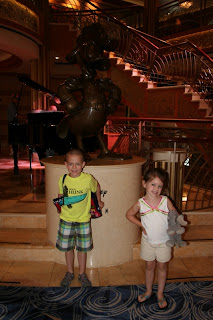 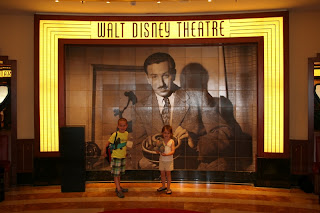 Because our state rooms wouldn't be ready for an hour or so, we wandered the boat and scoped everything out.  Our first major stop was the kids area (the Oceaneer Club, Oceaneer Lab, and It's a Small World Nursery).  I had already registered the kids online but we were able to pick up their security bands and then explore the area together as a family during the Open House time.

No wonder kids beg their parents to let them play in the Kids' Clubs.  They were unbelievable.  Harry and Babe didn't spend a TON of time in the clubs (an hour or so after dinner the first three nights and a 3-4 hour stretch on our sea day) but thoroughly enjoyed every second.  And I LOVED going to pick them up...it was so exciting to see what was going on each time...there were activities with characters (I saw Tinker Bell, Pluto, and an army guy from Toy Story during the times I picked up the kids), fun video game simulations (Harris got to "sail" the Dream and pretend he was a pirate), a Heffalump Hunt (one of Had's favorites), messy science experiments, and theme rooms:  Pixie Hollow, Monsters Inc, Toy Story...it was unreal. 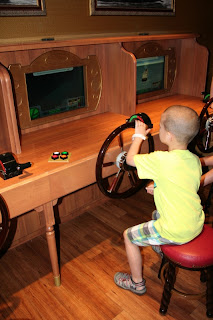 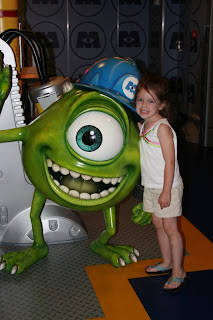 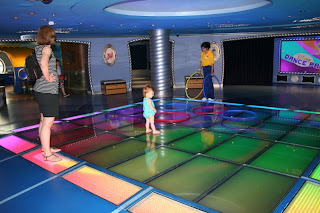 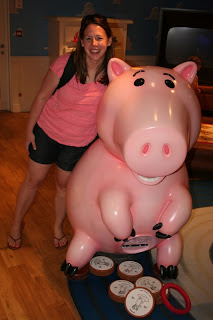 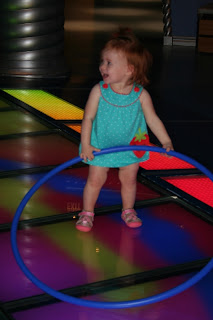 The security system in the kids' area was top notch as well, even in the nursery.  And every state room was equipped with two "wave phones" (cell phones) we could carry with us and use to check on the kids whenever we wanted!  If there's one thing I learned about Disney on the trip, it's this:  they think of everything.

When we finished exploring the kids' areas, we wandered up to Cabanas for the welcome aboard buffet and just happened to run into a few princesses along the way!  My girl was stoked!!!!  Harris was not...he didn't want anything to do with the princesses.  Ben just wanted to meet Aurora. :) 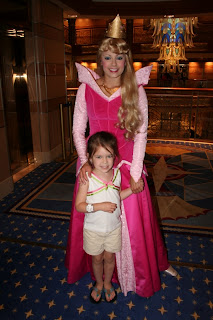 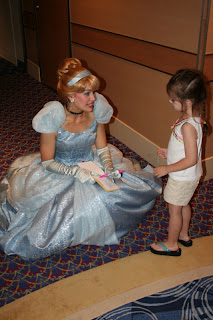 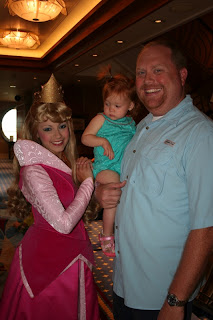 Harry did, however, take a few minutes to relax a little in the big window seats.  He LOVED those things! 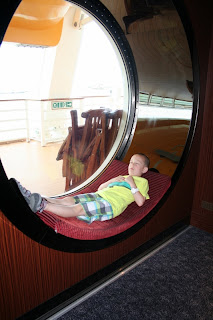 After gorging ourselves at the buffet we set out to find our state rooms and get ready for the safety drill.  We booked two deluxe family oceanview rooms (with verandahs!) that were connected.  We left the connecting doors open for the entire trip and even had the crew open the divider between the verandahs as well.  It was a very sweet set-up. 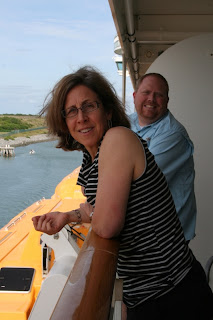 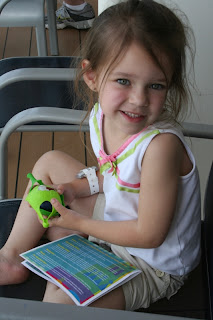 Even though you no longer have to wear life jackets during the safety drill, the big kids still freaked out in the minutes leading up to the alarm.  The whole thing was actually very calm and easy (Babe and Harry were most concerned about what the alarm signal would sound like); my kids simply inherited a crazy anxious gene somewhere along the way!

After the drill, we came back to our rooms to change clothes for the evening.  I'm pretty sure we also watched a little television to unwind.  The big kids (and Ben) watched the "Old Mickey" channel whenever they could.  All three are suckers for some old school cartoons.  There were plenty of other channels available, too, as well as an On Demand library of any Disney movie you could imagine.  Very sweet.  Because we had our own verandahs, we opted not to fight the crowds for the Sail Away Party and instead waved goodbye to Port Canaveral from the privacy of our own rooms.  We need a little rest. :) We could hear the music playing a few decks above us, though, and it sure did sound like fun!

We chose to eat dinner during the second seating.  It was late (8:15) but we made sure to feed the kids a late afternoon snack every day (chicken fingers, hamburgers, pizza, paninis, fresh fruit, french fries, milk, cokes, water and ice cream were available around the clock).  I figured the kids would also enjoy the live shows more before dinner (and they did!) not to mention the fact that a perk to second seating is the "Dine-n-Play program,"  which we used almost every night.  The waiters would bring the kids' main meals when they brought the adult appetizer course, allowing our family to have a dinner experience together (about an hour long) and then the Kids' Club Counselors would come through the dining room and check the kids into the clubs so they could play-and we didn't have to miss dinner!  Genius.

So...after our down time we headed up to the Walt Disney Theater to catch the Broadway-style show, "The Golden Mickeys."  This time, we ran into Tiana.  :) 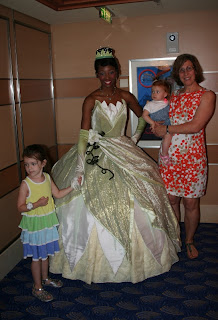 Photographs weren't allowed in the theater, but the staff made an exception for us because Hadley actually got picked to "star" as a dwarf with Snow White!  Harris was offered the opportunity as well but declined.  She got to spend time backstage with the characters (she was escorted by a crew member while we watched the beginning of the show) and then made her debut in front of hundreds of people!  I'm pretty sure Granti, Ben, and me all cried when we saw her. :)  Having Had participate made a stellar show that much better!  We so enjoyed singing along with a wide variety of characters in a wide variety of scenes from a wide variety of movies.  Even Emmy paid attention for almost the entire hour!  And, as a special treat, Hadley had a certificate delivered to our room the following day recognizing her performance in the show! I've decided it's the attention to detail and the little things that truly make a Disney vacation spectacular. 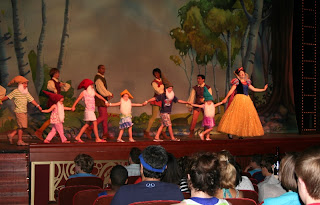 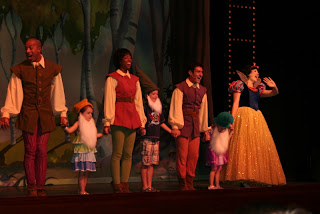 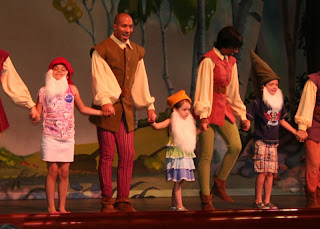 We had a small amount of down time between the show's end and our dinner seating (the folks with first seating dinner saw the show while we ate) and we were lucky enough to run into a few more characters in the atrium lobby. 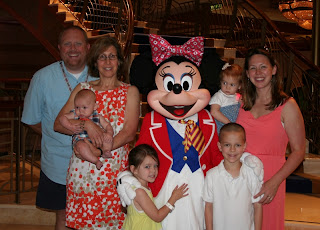 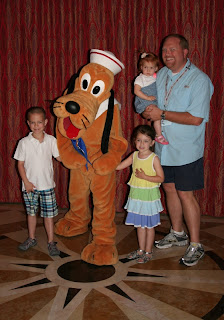 We also took some time to stroll along the "Deck 4 Promenade."  The view of the ocean was beautiful!  It was also windy. 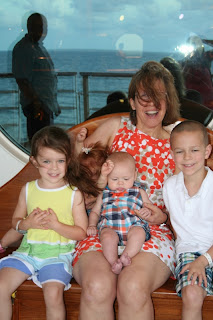 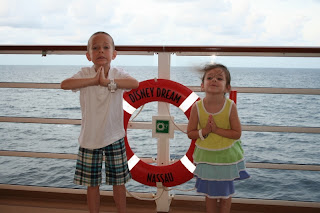 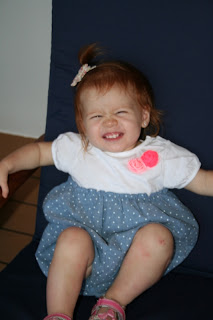 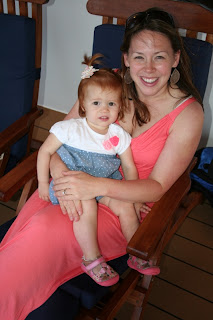 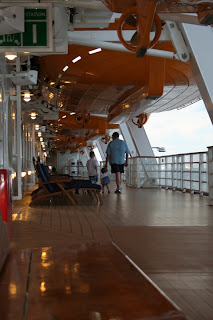 Disney does what's known as rotational dining for dinner, so instead of reporting to the same restaurant each night, your wait staff actually follows you through three different restaurants, each with a unique theme and menu.  We ate at Animator's Palate on our first night.  The food was great (although I don't remember what I ate) and the "show" was even better!  Crush (the turtle from Finding Nemo) "swims" around various screens and stops at each table to carry on conversations with each family (exactly like Turtle Talk with Crush at Epcot).  The technology is amazing (Crush is animated) and the atmosphere is even better! 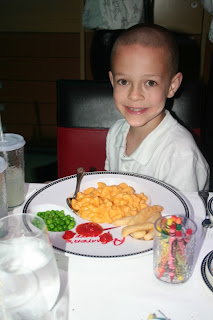 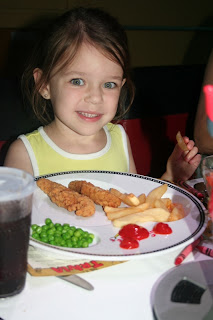 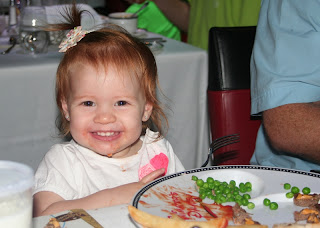 After dinner we picked up the big kids from the Oceaneer Lab (they participated in Dine-n-Play) and headed back to our rooms for the evening. 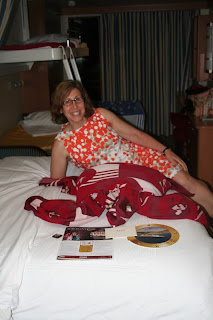 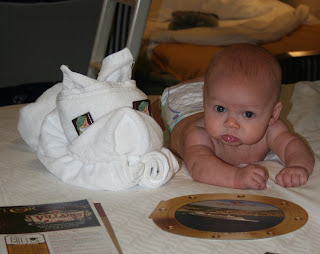 We fell into bed rather quickly.  Hadley slept in Granti's bed (the queen-sized beds in each room were SO comfortable!) and Emmy and Harris also cuddled up in Granti's room (both rooms were equipped with pack and plays and diaper genies for the babies as well as a set of bunk beds-one that converted into a couch during the day and another that folded up into the ceiling).  Ben and I only had Thatcher with us and the subtle rocking of the boat put everyone into a deep sleep.

But not without a little "Old Mickey" watching first!
Posted by Heather Haynes at 10:05 AM