Just finishing up these posts makes me miss our time on the boat so much!  For the record, my big kids said they enjoyed the cruise better than the actual park...I would definitely agree with them!  While we love the parks and will continue to return, our time spent on the boat was soooooo easy.  We're definitely looking forward to a return trip on one of the Disney ships!

Day Four was our "sea day."  I was a little worried that the boat would seem super crowded (it was at full capacity-4000 people!) but it didn't feel that way at all!  We spent the morning lounging with our good friend, "Old Mickey," before making our way up to the breakfast buffet one final time. 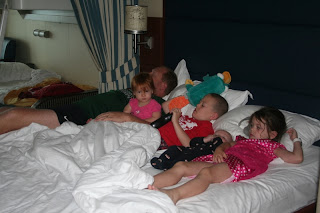 We went ahead and dressed in our bathing suits so that after breakfast we could walk right out into the pool/AquaDuck area.  On our way out of Cabanas, we ran smack into Donald and Daisy!  Our timing couldn't have been more perfect. :) 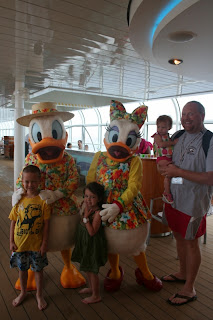 Up until recently, Emmy has been a little wary of characters (most notably, the Chick-fil-a cow).  This trip, however, she LOVED them.  She wasn't brave enough to get close on her own but she would point and laugh whenever she saw one (even if we were across the room) and would reach out and touch them (or give high fives!) if someone was holding her. 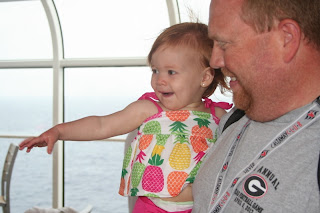 We found a place to make camp on the pool deck and hopped right in!  The AquaDuck opened right as we got settled (9:00) and Ben, Granti, the big kids, and me took turns riding it until we'd had enough.  We rode three or four times with no line whatsoever and then had to wait maybe 5-10 minutes the last few times.  By that time, though, the kids were tired of riding so us adults took turns.  It was such fun to be able to wave to the kids in pool down below as we made our way through the clear tube!

Babe and Harry had such fun playing in both Mickey's and Donald's pools.  We got to hop in the hot tub for a little while, too!  I had forgotten what I'd been missing out on being pregnant these last two summers. :) 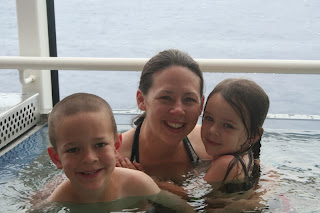 Emmy Doe had a BLAST playing in Nemo's Reef.  I can't wait to hit up some more fountains and the local kids' pools this summer! 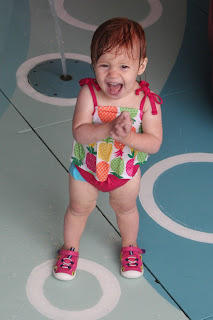 A day at the pool wouldn't be complete, of course, unless Babe played "The Little Mermaid."  Here she is striking her best "Ariel" pose. 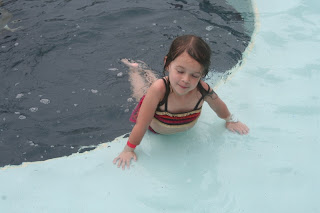 And here's my little mermaid in the grand scheme of things: 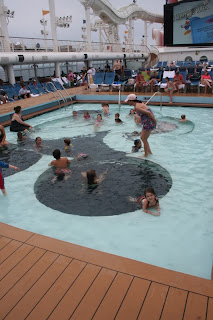 After a couple of hours on the pool deck, we headed back to our staterooms to change for the afternoon.  We checked Harris and Hadley into the Kids' Club and dropped the babies off in the nursery and then Ben, Granti, and me headed to Palo, one of the adult-only restaurants on the boat, where we had booked brunch.

Oh.My.Goodness.  If you ever have the opportunity, do this.  There is a small additional charge for the brunch but it is so, so, so, so worth it.  The scenery is gorgeous, the food is impeccable, and we had the best waiter ever. 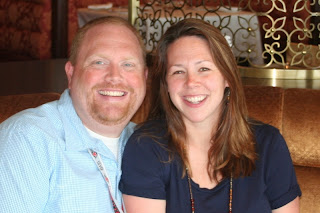 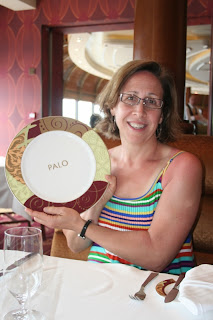 Our meal also came with our choice of champagne or a mimosa.  While I didn't drink any of mine, I think Mom might have had a sip or two!  I'm positive, though, that Ben is the only one who finished his glass. :) 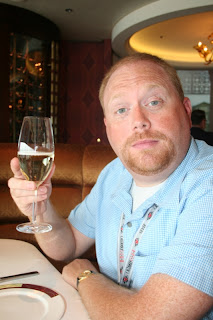 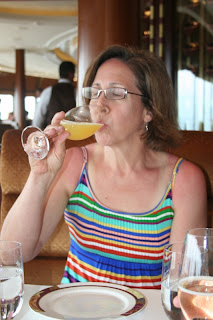 Our waiter was from South Africa.  We had such a good time getting to know him; he told us all about life on the boat!  It really is fascinating to think about how the crew live:  we asked all kinds of questions and he answered every single one (and even got a few more folks on the wait staff involved!).  Mom was especially curious about STDs and condoms?!?!?!  He said that all the crew members were tested for drugs and STDs every couple of weeks and if you failed the test you were sent home.  He also told us that males and females could only share a room if they were married and that sometimes crew members would get married in port so they could be in a room together!  And, in case you're wondering, condoms are available from the crew medic and come in two sizes:  regular and Asian.  (And yes, we laughed loud and hard throughout the entire brunch.)  The crew live on the boat for a contract period of about 5 months.  They then have 6-8 weeks off and can sign up for another contract after that.  Senior officers can have their families on board and there are even some children who live on the boat!  Talk about awesome. :)

Along with all that talking, we managed to fit in a LOT of eating.  I only took this one pic of my (first) appetizer plate.  Palo is an upscale Italian restaurant and while there were some items that didn't really fit my fancy, most everything I ate was delicious.

We all had multiple plates of appetizers, three of their specialty thin crust pizzas to share, we each ordered an entree (I had chicken parmesan) and then we proceeded to taste every one of the desserts offered (probably around 12) at least once.  We were there for about two hours.

It was seriously so much fun! 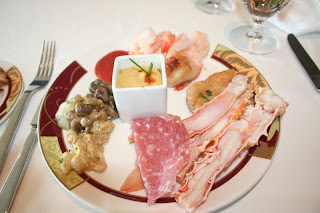 Our sweet waiter walked us out.  He also took the time to show us the wine collection on board.  I don't drink and I don't know anything about alcohol but there are evidently some very expensive, very rare wines on board (and some shots that cost $1500/piece!!!!!).  Crazy. 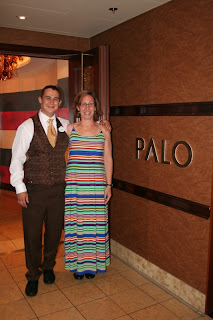 Once we could finally move, we decided to explore the "adult only" section of the boat.  It was super windy but also amazingly calm and serene.  There are multiple bars and clubs, a spa, and a swimming pool (spread throughout various decks) on one end of the boat dedicated to the 18 and over crowd.  It was crazy how quiet it was on that end! 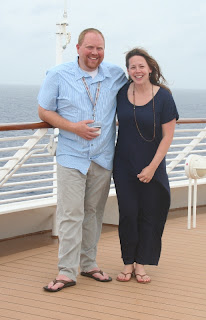 The boat also boasts both a supervised area for teenagers as well one for tweens.  We were able to check out the teen pool from the adult-only deck.  The ship literally offered something for everyone. 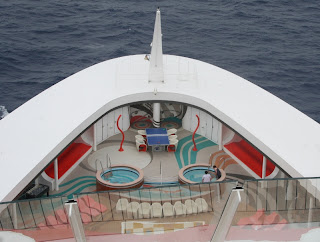 We also managed to explore the gift shops before picking up the kids as well.  You know my man loves to shop. :) 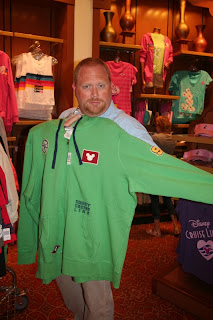 Once we'd had our fill of adult exploring, we went to pick up Babe and Harry so we could have a little fun with them.  Even though they'd been fed in the Kids' Club, Had was a "little hungry," so Granti took her up to grab a snack while Ben, Harris, and me set off to solve the "case" Harry had picked up from The Midship Detective Agency on our first day.

The ship is covered in artwork (everything is so beautifully decorated) and throughout the boat we often ran into "enchanted art:"  framed pictures where the images actually moved!  The kids loved looking for the enchanted stuff!  As if that wasn't enough, though, you could also sign up to participate in "The Midship Detective Agency" and pick a case to solve.  Throughout our stay, Harris worked on the "The Case of the Missing Puppies."  He had a casebook with a map of the boat and a list of suspects and we searched high and low for the art containing clues to his case.

The technology was so awesome!  We'd find the piece of art labeled in his map, he would hold up his "badge," and an animated, audible clue (like a short, personalized movie clip) would pop up!  We were finally able to cross off all of the villains on our list except for Yzma (from The Emperor's New Groove) and were beside ourselves excited when our final clue told us which frame we could find her in trying to escape! 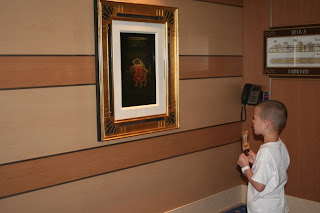 We were way too smart for her, though!  She ended up in handcuffs. :) 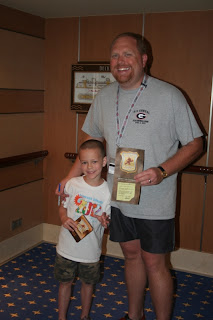 Once we caught Yzma, we headed back to the room to rest up for the evening's festivities and pack some of our bags so the porters could pick them up and have them ready for us in the terminal the next morning.  Harry was hungry by that point, so he ordered a little macaroni and cheese from the (free!) room service menu, too.

We hung out in the rooms and on the verandahs until it was time to head up to the final show, "Believe."  This was another great show full of songs and characters from a variety of movies.  This was also the only show that, for whatever reason, Emmy didn't want to sit through.  She and I spent the last 20 minutes walking around the lobby and atrium but there was so much going on out there that I didn't mind. 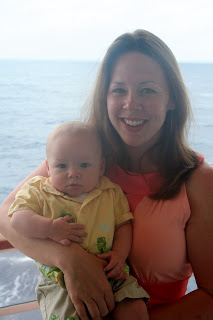 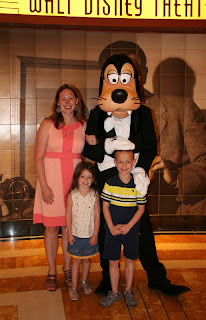 In between the show and dinner we did a little shopping.  The kids all got a small souvenir and Ben picked out a piece of artwork that he actually had signed by the captain.  I can't wait to frame it and hang it in our home.  At the rate I hang things, we should have it up by Christmas! 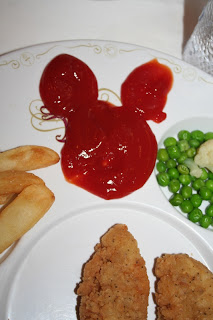 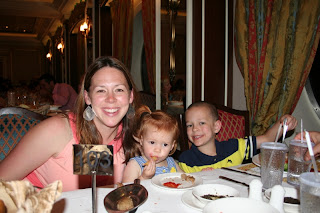 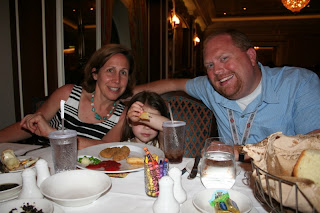 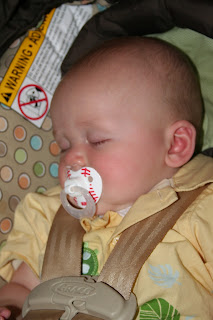 The kids were in LOVE with the monkey we found hanging in our room after dinner. We also found a few little gifts from the nursery staff:  pictures of the babies enjoying themselves and certificates for both Emmy ("The Best Cuddler in the High Seas") and Thatcher ("The Cutest Baby in the High Seas"). 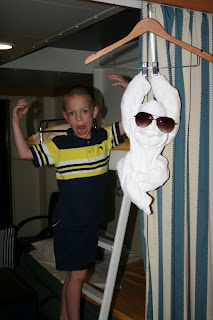 Babe and Harry were also excited about their autographed t-shirts we found waiting on the bed!  I actually purchased these shirts before we left and turned them into Guest Services when we boarded.  The girls' shirts are signed by the princesses and Harry's is autographed by Mickey and the gang.  This particular service isn't advertised on the boat so I was glad I knew to take advantage of it! 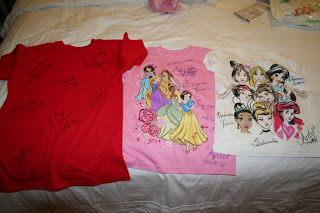 We woke up bright and early for our final breakfast on Thursday morning.  We chose to eat in the dining room one final time (our sitting was at 8:00) and then disembarked and headed back to reality. :( 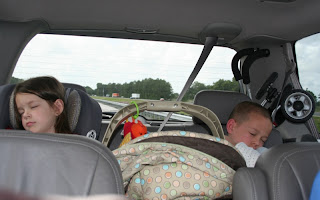 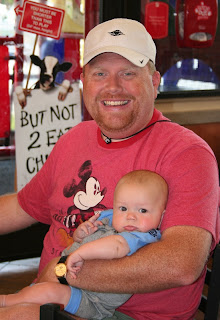 What an awesome, awesome start.
Posted by Heather Haynes at 10:28 AM