This past week was crazy, mostly due to the fact that I had to work a couple of days.  We also celebrated Harry's sixth birthday, which only added to the fun!!!

Here's how we spent our third week together this summer:

Monday:  We headed out to the local library puppet show and then checked out books.  I'm pretty certain Babe checked out every book about horses she could find.  Tyler spent the afternoon with the kids while I got a little work done.

Tuesday:  A full day of work for me.  Yuck.  The kids had a great time hanging with Ben, though, and he even managed to take Harris and Hadley for a haircut.  Good stuff.

Wednesday:  Another day of work...but the last one for me this summer!  Auntie kept the kiddos and they spent the day playing Super Mario Brothers 3.  I'm pretty sure they only stopped for lunch at McDonald's.  Cassidy beat the game, though, so Harry was super pumped.

Thursday:  Harris' SIXTH birthday!!!!  More to come on that in a separate post.  We celebrated quite a bit.  The kids and I also headed to the movies to see The Smurfs.  Harry and Babe ended up liking it.  I'm extremely thankful we only paid $1.50 to see it.

Friday:  Let's see...a trip to the dollar store to grab some party favors for Harry's party, time at the gym, lunch at Johnny's with DB, Tyler, and Paige, and a fun afternoon at Stars and Strikes.  Harris, Tyler, and Paige played Laser Tag! 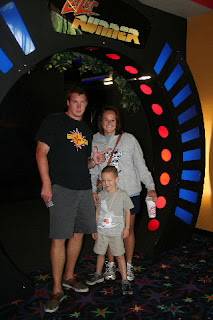 It was Harris' first time and he absolutely loved it.  He came out talking about how badly he beat everyone.  I'm not sure if that's an accurate statement, but whatever. 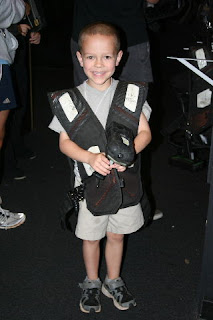 All the arcade games are half-off on Fridays, so we didn't even make it to the bowling alley.  The kids earned tons of tickets!!!!! 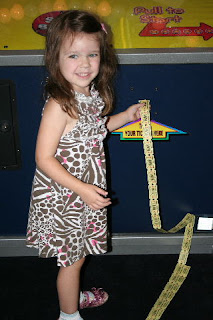 They had enough to both select a medium-sized toy (something like a stuffed dog) but instead opted for very small prizes:  Hadley chose a Dum-Dum sucker and Harris selected a bouncy ball.

We spent the weekend celebrating Quinn and Harris, attending another friends' pool party, and having tons of family fun on Father's Day.

Posted by Heather Haynes at 6:34 AM