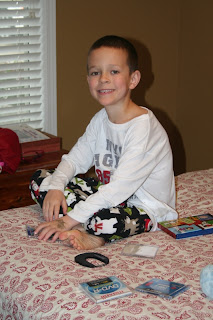 My sweet Harris came down with a nasty case of the stomach bug last weekend.  He went to bed extremely cranky after his baseball game on Friday night and woke up about two hours later (and every two hours after that) as sick as a dog.  I can't really think of any reasons why this is actually blog-worthy other than the following:

-it's the first time any of our children have ever experienced a throw-up type bug, much less the dreaded North/South.

-it's the first time I can remember washing 11 loads of laundry in one weekend.

-it's the first time I think we've ever stayed home for an entire weekend.  Harris and I skipped out on Olivia's birthday party on Saturday night and church on Sunday morning.  It was a loooooong couple of days. :)

-it's the first time I've ever quarantined one of my kids.  Harry spent 48 hours sleeping in his bed or hanging out in the "dog's room" (our guest room) watching home videos.  Nobody else was allowed in and he certainly wasn't allowed out.

Email ThisBlogThis!Share to TwitterShare to FacebookShare to Pinterest
Labels: Harris