Ben and Harris headed to Chick-fil-a's first annual Father/Son Football Night last night.  To say Harry was excited would be an understatement.  The kid was beside himself, literally bouncing off the walls.  He could not wait to get dressed up in his UGA gear and even had an opinion about what Ben was going to wear.

And by opinion, I mean Ben put on a shirt and Harris walked in and said, "Really?  You're going to wear that?"

So Ben changed, only to be told again, "Really, Dad?  A red shirt with Uga smoking a cigarette?  Really?"  Harry was cool with it, though, once he realized that Uga did not, in fact, have a cigarette in his mouth but rather a pennant.  All was right with the world. 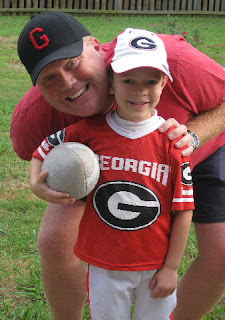 The girls and I met up with our boys at Menchie's after the dinner date.  Harris leapt out of the truck, yelling, "It was AWESOME!" and doing some kind of pelvic thrust at the same time.  Not too sure about that one.

Evidently, the boys were greeted by "teenagers" (shout out to the local high school football team), treated to a tour of the kitchen area, and saw a few people wearing "disgusting Georgia Tech clothes" on their night out.

Babe immediately asked Ben when she could have a "Daddy/Daughter football date night."

I don't think I've ever been more excited for a football season.
Posted by Heather Haynes at 5:51 PM