Last week, Harris' future elementary school hosted a "Kindergarten Roundup."  We'd been talking it up all week, so naturally Harris was super pumped for the big day.  I, too, am getting more and more excited for him as we get closer and closer to his public school debut.  I'm not sure if I'll still feel that way or not once August rolls around, but for now, I do.  There is no doubt in my mind that our decision to have him start Kindergarten at six years old rather than five was the right thing to do.  We're confident, he's confident...it's pretty much a win-win. 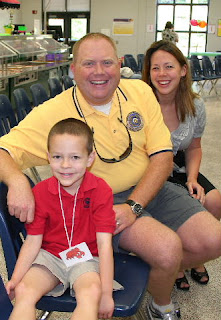 We started the morning in the cafeteria with a greeting from the principal and a performance by the current Kindergarten class.  A couple of Harry's friends were up front singing, which was pretty cool for my sweet boy.  After a few songs, the upcoming Kindergarteners were divided into groups and led away for story and craft time with the current teachers.  Harris didn't hesitate in the least when his group was called; in fact, he couldn't get out the door fast enough!

We were able to hear from the school counselor and an administrator while the kids finished up their project time and then were reunited to take a spin on a school bus.

I'm glad I don't have to ride a school bus every day.

The driver was very sweet and explained all the bus rules to us.  She took us on a ride through a local neighborhood and demonstrated quite a few different "stops."  She even demonstrated--multiple times--how the bus turns around in a cul-de-sac.  I appreciate her dedication, but once was enough for me. :)

And then we were done.

Ben and Harry headed out to meet his class at the Gwinnett Braves game for his last field trip of the year and I headed to work.