A capella singing rocks.  Even Harris thinks so.

We've spent lots of time this Christmas season listening to "Big Cooper" and the UGA Accidentals break down some Christmas songs on the iTouch.  Both Harris and Hadley seem to have an uncanny knack for memorzing lyrics, and the songs are only better because we actually know someone singing them!  When we found out The Accidentals' Christmas concert was scheduled for a decent time this past Tuesday night, Ben and I jumped at the chance to take Harris up to "The Georgia School" to hear a few of his favorite tunes live.

Harry LOVED it.  He got to hear the boys' and girls' groups sing songs he recognzied, help Big Cooper run sound, take a trip backstage to meet the "guys," and even earned a shoutout from the stage!!!! 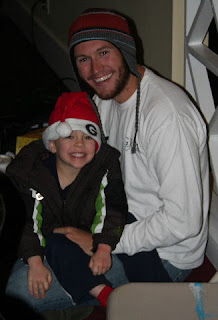 The Accidentals ended the show by singing a silly version of "The Twelve Days of Christmas," which has quickly become one of my kids' favorite things to listen to.  It's a crazy conglomeration of lots of different songs, and Harris has the whole thing memorized.  I would have given a million dollars to have been able to record the look on his face when he heard someone say, "And this last song is for a special fan in the audience.  He's four years old, and his name is Harris, and this is one of his favorite songs.  He's helping run sound tonight, and he knows all the words, so Harris, if we mess up, will you help us?"

My sweet boy answered with a loud, "I will!"  And then proceeded to sing along with the entire song.

And, FYI, if you're into watching "The Sing-Off," just like I am, you should totally go check out the next Accidentals show.  It's "The Sing-Off" in real life, and is tons of fun.  Seriously.
Posted by Heather Haynes at 6:51 PM