Ben and I were treated to a lovely Thanksgiving meal yesterday afternoon courtesy of Harris' Pre-K class.  I love, love, love getting the chance to see him in "action" at school.  According to his teacher at his early release conference just a couple of weeks ago, Harris has become quite comfortable in the classroom.  Academically (which is a funny word to use when talking about four-year-olds), he's in the top of his class...HUGE props to Ms. Ginnell!!!  He's still got a little bit of growing to do emotionally, but his teacher says he's got good friends and is quite an independent little guy.

I'm defining "independent" as "crazy."  He has very few serious bones in his body. 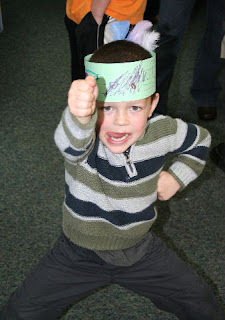 The school donated a turkey for each class, and parents contributed all kinds of side dishes and desserts.  I made homemade M&M cookies (which are pretty much the only thing I know how to bake) and totally heard another mom talk about how delicious they were!  Had I been in any other setting, I would have pulled out my phone and tweeted that junk all over the world.  Seemed a little inappropriate in the Pre-K room, though.

Anyway, Harris chowed down on some turkey, mashed potatoes, fruit, rolls and jello.  I think he's learning to like Thanksgiving. 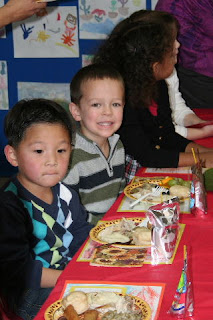 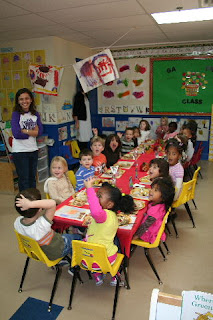 We really couldn't ask for a better preschool (or daycare) experience.  Harris has grown leaps and bounds socially over the last few months...I guess in this season of thanks, Primrose is pretty high on the list. 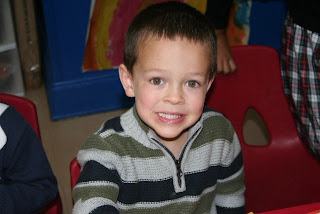 ﻿
And, most importantly, now that we've had at least one official Thanksgiving meal, Ben is on board with getting ready for Christmas, so I'm super stoked.  It is, after all, the most wonderful time of the year. :) 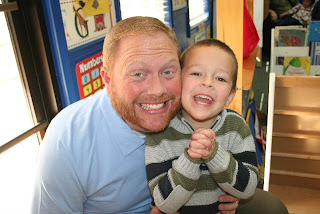