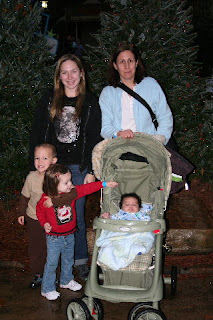 We headed out to Stone Mountain earlier this week.  In case you can't tell, Mom was super stoked about the trip.  Actually, I think she had a pretty decent time, minus the rain.  It's hard to complain about a little drizzle, though, because it kept the crowd unbelievably light, which is almost unheard of during the Christmas season.

And thank goodness there weren't a ton of people around, because Harris was beside himself with excitement.  Running, jumping, leaping, spinning...you name it, he was doing it.  Ben and I had to ask him to "act human" more than once. 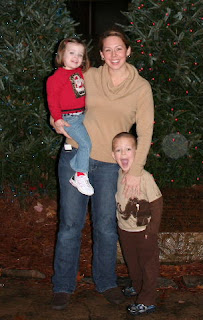 ﻿
Christmas is soooooo much fun through the eyes of a four-year-old.

We were able to see The Polar Express 4D movie, play in The Great Barn, hop on the Christmas Train Ride, take in the two million lights (or whatever it is they advertise), browse through a couple of shops, and visit with Santa all in less than two hours.

Harris asked Santa for a remote control Buzz Lightyear and a green bicycle.  He then informed me that Santa's response was, "okay." 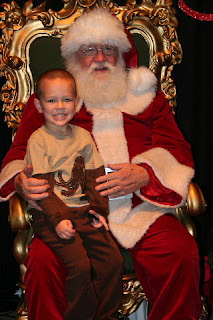 ﻿
Babe would have preferred to not see Santa.  Had she not been hyperventilating, she would have asked for a "Rosie train." 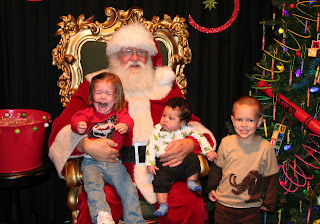 ﻿
Sweet Sam simply had no clue.

One of the new discoveries this year has been mistletoe.  I'm thinking I might need to carry some with me at all times, seeing as how even Ben can't resist its power...Harris isn't the only one who managed to score a kiss at Stone Mountain! 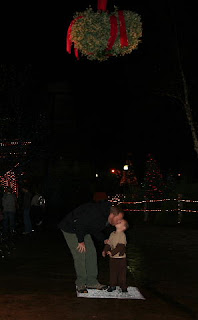 ﻿
Other than the small amount of PDA I was able to drag out of my husband, I think my favorite part of the evening was singing Christmas carols with the kids while riding the train.  We LOVE to sing, and it's even more fun now that Harris and Hadley know the words to quite a few songs.  "Rudolph," "Jingle Bells," and "The Twelve Days of Christmas" are some of our faves, along with "All I Want for Christmas is My Two Front Teeth."
We're getting quite a bit of use out of the iTouch and Pandora these days.﻿
And to think, this is only the beginning... 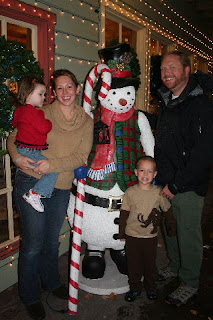