Last Saturday, Harris got to attend his very first "G-Dawgs" game!  Ben and I had been talking it up for weeks, and Harry was more than ready to head out on Saturday morning.  Even though he's had the opportunity to watch most of the away games with us on television, I'm not entirely sure he knew exactly what he was getting into, and I'd be lying if I said I wasn't a little worried about how the afternoon would go.

To say the day was awesome would be an understatement.  Even with the super cold temperatures, Harris was a trooper and really didn't complain any.  He had a blast rocking his G-Dawg hat and jersey, and loved hanging with his peeps, eating marshmallows, wrestling with Big Cooper and Chase, and playing "bean bags" and football at the tailgate. 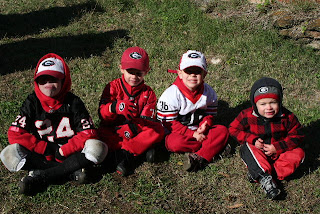 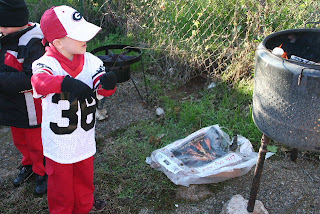 ﻿
I think it's safe to say the only thing he really wasn't a fan of would be the potato pancakes...
The entire walk from our tailgate spot to the stadium follows a train track﻿, which only made the whole experience even better in Harris' eyes...he jumped and ran and laughed and yelled and held hands with anyone who'd let him hang on, and that crazy kid did a better than decent job of keeping up. 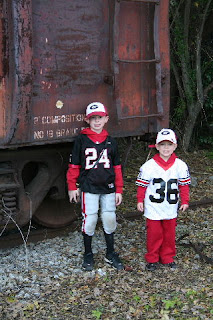 Once we made it into the stadium and to our seats, Harris was pretty mesmerized by the action.  And by action, of course, I mean anything and everything other than the game.  He watched other people, he sang along with the band, he asked a lot of questions about touchdowns and kicking and points, and he kept his eyes glued on the cotton candy man.  In fact, his running commentary on the location of the cotton candy had Ben and I laughing out loud:  "Look at the cotton candy man.  He sure is close to us.  That cotton candy is so close.  I love cotton candy.  Oh dear, the cotton candy is getting farther away..."
We bought the boy some cotton candy.
Because Ben is super awesome and earned a letter at UGA, we got to head onto the field during halftime.  The boys had an up-close view of the halftime show and even got to give high-fives to the players and coaches as they ran off and back on the field. 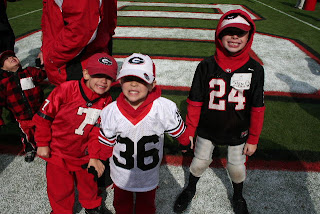 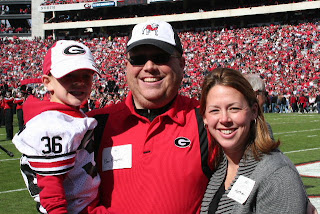 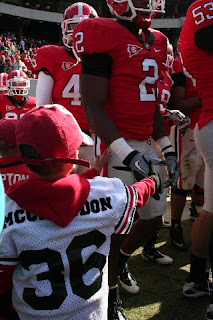 Not too bad for a first game.
We finished the second half sitting with Harris' friends, where the boys kept themselves entertained with a pair of binoculars and the rest of us soaked up every second of the win. 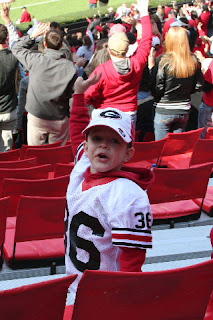 To which Tanner replied, "I come every Saturday."

I think we've created a monster.