Chick-fil-A has been giving away "Martha Speaks" books (based on the PBS cartoon) with their Kids' Meals for the past couple of months.  The kids have fallen in love.  We read our Martha books regularly, talk frequently about Martha and Skits and Helen, and have even added "Martha" to the DVR lineup.

About a month ago, Harris began asking for a "Martha dog."  Ben and I decided that if he was willing to work a little bit and contribute toward the purchase, we'd be more than willing to allow him to have a "Martha dog" of his very own. And so the "jobs" began...

Harris cleared the table after dinner, straightened up the playroom, kept his room clean, and put his laundry away.  He earned $1 for every 5 stickers he collected, and we told him that once he had $14.00 (half the cost of Martha, some cash to save, and his tithe), we'd help him buy a Martha on the computer.

Neither Ben nor I were aware of the cash that kid had saved in his special Georgia box.  Thanks to Mimi and Poppa and all the $2 bills they've sent, and to Granti and all the singles she mails, it took Harry about a week to earn all the money he needed. 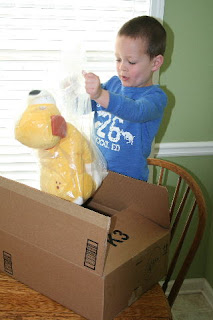 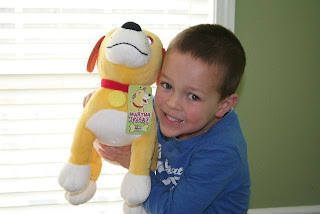 And to Martha.  That dog hasn't left his side since she came in the mail.﻿
Posted by Heather Haynes at 5:09 PM