To say I was stressed about G-Day would be a bit of an understatement.

Don't get me wrong:  I'm a get-up-and-go kind of girl.  I don't like sitting at home.  And I love Athens.  But the thought of carting four kids (two babies!) around Sanford Stadium by myself (Ben was coaching in the Letterman's Flag Football Game) just didn't sound like fun to me.

I'm glad Ben talked me into going.  We ended up having so much fun.

We got to the stadium a little bit early and were able to goof off on the field before the flag football game (which was played right before the actual G-Day game) started. 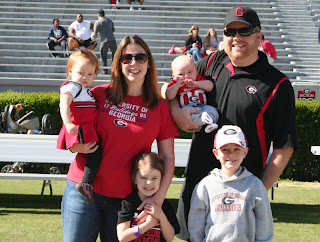 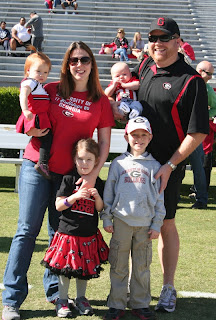 I even nursed Thatcher "between the hedges."  I can't imagine many babies have nursed on the field before.  Ben took a picture so that one day our youngest will have his very own claim to fame. :) 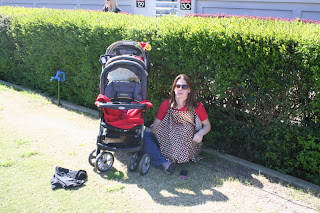 When it was time for the flag football game to start, the kids and I joined my friend Emily and her four boys in the stands.  And yes, your math is right:  two adults, eight kids.  I didn't get to watch much football, but the kids had a great time playing cars, eating snacks, running up and down the track before they opened the gates to the public and things started to get crowded. 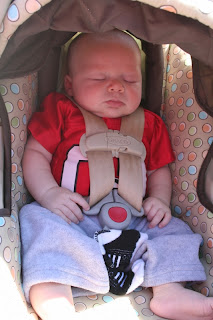 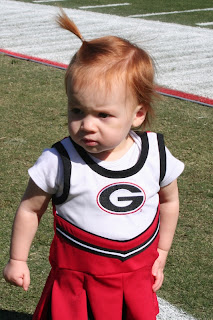 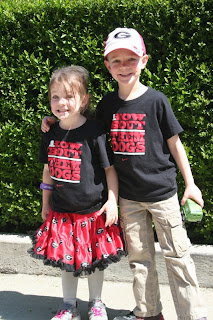 By the time the flag football game was over, the kids had been contained long enough.  Ben joined us in the stands for a little lunch from the concession stand and the first quarter of the actual game.  We then loaded up and headed over to the UGA Bookstore, where the kids found a nice, quiet place to "relax."  I nursed Thatcher, we changed diapers, and everyone chilled for a little bit before we headed back to the van and drove to Stegeman Coliseum for the the Letterman's BBQ.

I wish I'd taken pictures.  Our kids have absolutely no idea how lucky they are:  they spent the morning on the football field and the afternoon running around a practically empty coliseum (the BBQ was set up down on the floor) like they owned the place:  up and down stairs, in and out of different sections, through numerous rows.  It was so much fun to watch their imaginations take off and see them so thoroughly enjoying themselves.  I just have to laugh at their idea of a "normal" trip to a Georgia game, though.  I'm not sure spoiled begins to cover it.

Anyway, we ended the day excited to go back next Spring.  Hadley missed "playing at the tailgate," but we explained to her that tailgating starts back up when the season begins and she seemed pretty satisfied with that answer.