The kiddos just recently wrapped up round two of swim lessons.  Once again, they absolutely loved their time at Swim Atlanta, and both Harry and Babe passed their level tests (or whatever those things are called) to advance to the next class. 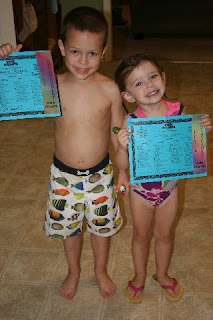 Truth be told, they were waaaaay more excited about the candy they received at the end of the last class than the advancement ribbons.  They're definitely my babies. :)

Hadley continued to fall in love with her teacher, Mr. Caleb, and soaked up every bit of his attention this time around...especially because she was the only student in her class!  Harris' personality shone through during his time with Ms. Jannette as well.  He swam great and truly became the leader of his little group, and only got in trouble once for kissing another little girl during the lesson.

The kids have decided they're done with swimming for the time being (I'm thankful!) and ready to move on to gymnastics, so we'll be participating in a trial run here in the next couple of weeks.  Ben and I are pretty much up for anything that requires (at most) a one-night-a-week commitment, so we're willing to give them a shot in the gym.

Look out, Team USA, Babe and Harry are headed your way!
Posted by Heather Haynes at 7:51 AM