T-ball is beginning to look promising for Babe.

A couple of Saturdays ago, during the second game of the season, Hadley actually decided to warm up with her team! 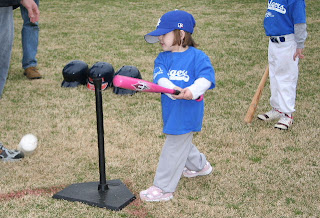 The phrase "with her team" might not be completely accurate.  She did warm up at the same time as her team, though.  She practiced hitting the ball off of the tee and running the bases, and had a fantastic time! 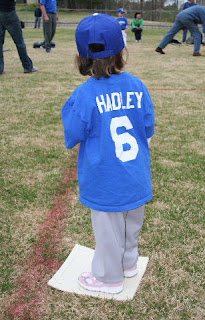 ﻿We thought she might actually play in the game, but nope.  She still refuses to put on her glove and play in the field, and when I attempted to put the batting helmet on her big head, all was lost.  She spent the game on the sidelines.
Harris, however, had another great game.  He even got to play first base, which meant he was able to touch the ball on every single play.  Which, in turn, meant no crocodile tears. 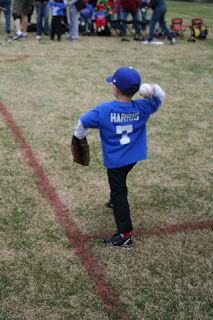 And to top everything off, Big Cooper and his entire family (and Andy!) came out to cheer on the kids, even in the rain! 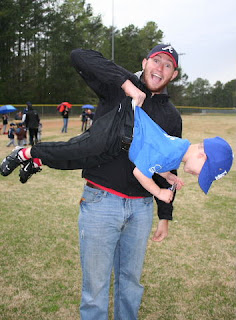 It's hard to beat Saturday mornings at the ballpark.
Actually, a start time later than 9:00 would be nice...
Posted by Heather Haynes at 5:04 AM